On October 16, 2016, we will have Nick Vujicic with us here at Shepherd’s Grove. Nick was born with a rare genetic abnormality which prevented the growth of arms and legs, but hasn’t let it stop him from leading a fulfilling life, and touching the minds and hearts of people from all around the world!

Recently, Nick visited with our Hour of Power family in the Netherlands, and shared the following in their publication, HoopMagazine. Get to know his story in his own words, as we look forward to his upcoming visit!

“My parents always taught me that everything happens for a reason and that you should always try your hardest, trust God and never give up. I’m
grateful to them for that. My parents not only did an amazing job raising me; they also had the courage to have more children…On the day I was born, my 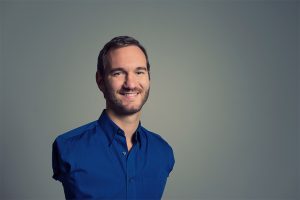 dad stood next to my mom and saw a little shoulder, but no arm. He almost fainted when he saw that, and the nurse had to escort him out of the room. I had what is called phocemelia. I have no limbs, and there isn’t any medical explanation for it. The doctors said I was likely to grow up a vegetable.

My mother said: “Take him away, I don’t want to see him!” My dad comforted her and said: “He’s beautiful.” They took me home, but it took three or four months for my mother to make her peace with it.”

“When I was six, I tried to live with prosthetic limbs, but after months of trying I found that all they did was limit me and I tried to function without as much as I could.

I was the first disabled person in the Australian school system and I was bullied. My parents encouraged me to ignore it, but I didn’t want to be special. I wanted nothing more than to have arms and legs, and to be like everyone else! Everyone searches for something to make them happy – for some people it’s money, or drugs or alcohol. I just wanted to not be rejected. Every time another kid made fun of me or excluded me from a game, my fear came back. But my parents kept believing in me and told me they would never give me up. At home, I was safe. When I was ten, I wanted to kill myself. I felt worthless, and I thought I would always be a burden to my parents and never get married. That’s why as a teenager, I wanted to be as independent as possible. My parents encouraged me and said: “You’ll never know what you’re capable of until you try.” Now I can do all kinds of things like swimming, fishing and snowboarding. I can brush my own teeth and wash my own hair. In every situation, I try to achieve as much as I can. It’s not what you have, it’s what you do with it. I am no longer afraid of failure.”

“I started giving speeches when I was about 19, and I travelled the world. I had family in California and they encouraged me to come over: “Nick, make your dreams come true! You can reach the whole world!” they said. I started Life Without Limbs and now, the organization has existed for over a decade. I’ve been to more than 53 countries and travelled millions of miles – it’s true! I am incredibly grateful to be able to speak for world leaders, but also to orphans and those who have been hurt or forgotten. I have a caregiver who travels with me. It’s so great talking to young people. They’re in the middle of a phase in which they’re still really being formed, discovering their values and setting goals. In my experiences with younger people, I see that sometimes it’s worse to live in a broken home than to live without limbs. I want to tell them they don’t have to be afraid. It’s not about the outside. It’s about who you are on the inside. I always think of my father who said: “you’re a gift, you just came in a different package.” 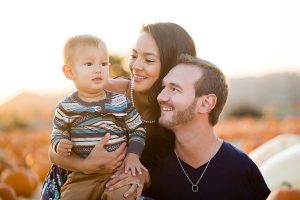 “I’m also married now. My wife Kanae is Japanese-American; we met in Texas. It was love at first sight. We are so grateful to have met each other!

Three months after we started seeing each other, I went through a personal crisis. I wanted to start a couple of companies, but it didn’t work out. Someone stole money from me. I had to ask my parents for money and when all of that hit home, I fell back into a depression and into the fear of being fearsome to others. All I did was cry. And what’s more, I couldn’t believe that Kanae would stay with me. But she said ‘I’m not going anywhere. I’ll get a job, it’ll be all right.’ That was when I knew she would be my wife. Nine months later, I asked her to marry me and one year after we were married, our son Kiyoshi was born and then Dejan.”

“My message goes beyond church walls and is based on my belief in Jesus. I tell people not to give up. Sometimes, we’re waiting for a miracle that doesn’t happen. I myself wished many things were different in my life. But the thought of me being a miracle in someone else’s life gives my own life value. We all have our worries. I’m no superhero. But I do embrace life as much as I can and focus on what is most important.”

To learn more about Nick and Life Without Limbs, please visit www.lifewithoutlimbs.org.