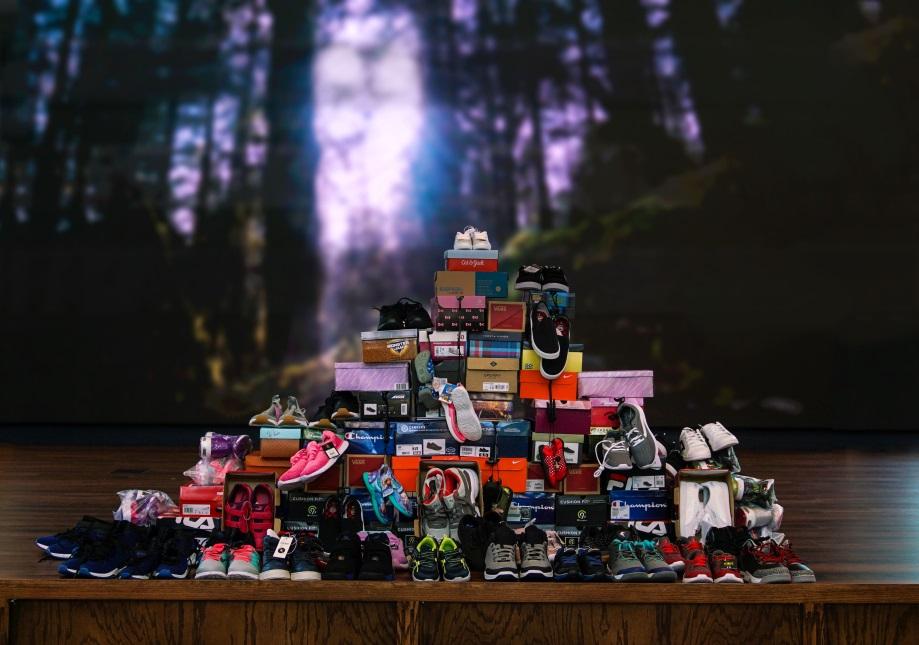 This past June and July, we heard about Royal Family Kids Camps, and during that time we also had an opportunity to support Royal Family by collecting new shoes so that kids attending camp would have a new pair.  Our church family overwhelmingly responded and we collected over 100 pairs of new shoes, and had a chance to pray over them in service.

Last Friday, I was invited to hear about the camp and attended a dinner held for volunteers who had just returned from camp that same afternoon.  The room was full – over 140 volunteers who had just spent a week sharing their lives with and showing love to over 70 kids from the Foster Care community. Shepherds Grove Presbyterian partnered with Rock Harbor and St. Andrew Presbyterian churches to put on this camp. It’s always great to see churches working together.

The primary purpose of Royal Family KIDS Camps is to give foster children, ages 6-12, a week of positive memories and royal treatment in a Christian camp environment.  All of the kids have experienced trauma in their lives, typically along with abuse or neglect. So, when a kid attends camp they receive lots of attention, love, and encouragement.  For most of these children, it’s the best week of the year – a special time when they can focus on having fun and enjoy just being a kid.

I was humbled by the dedication and compassion these folks have for kids, and how they gladly took time out of their own lives to love on kids for a week.  While there were many first-time volunteers, there were many who had served five, ten, and more years! All were thanked, and then there was a pause.

The camp director talked about the shoes! He and other volunteers shared how excited the kids were to receive a new pair of shoes. He asked me to pass on this thanks to all of YOU who donated new shoes. The kids loved them! I also thank all of you too! You helped make camp even more special.

Closing out the event, it was during share time when things got emotional.  It’s a tough but rewarding week! Volunteers shared how kids changed during the week — some arrived angry or detached but after a few days of being shown unconditional love, they opened up.  Relationships were formed, walls came down. There were tears, laughter, and a sense that most if not all would be back and volunteer again.

Do you feel a call to get involved?  Camp is fantastic but only one week. How about the rest of the year?  Year-round mentoring opportunities exist and kids want caring adults in their lives, so become a mentor!

Questions?: Stop by the OUTREACH table or contact Curtis Drever, Director of Missions and Outreach curtis.drever@shepherdsgrove.org